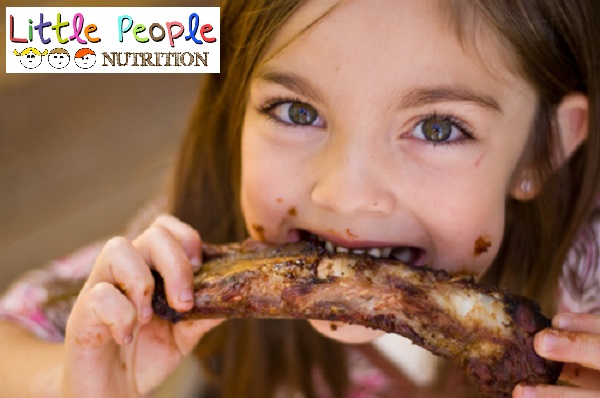 Published on January 8, 2015 | in Nutrition By Little People Nutrition | 0 Comments

There are quite a few popular ‘diets’ going around at the moment that many people are hoping on and defining the way in which they eat.

One in particular is Paleo, which I find very interesting.

But is this ‘diet’ named as Paleo a good one to go on for yourself as an adult, or more importantly what about the whole family, especially young children?

In the simplest of terms, the Paleo movement  is based on the principle of the hunter-gathers who lived over 10 000 years ago. They hunted their main source of protein and gathered and foraged for nuts, berries, fruits and greens. Because of the way in which they would access food, their food pyramid is very different to ours. In fact it would look a lot like this.

Here is the Australian Dietary Guidelines pie graph of what areas we are suggested as a modern diet.

So although this is a pie chart and the Paleo diet is based on a pyramid, you can see that there is a difference in weighting on meats and proteins and the Paleo exclusion of:

So what are the good points about the Paleo diet?

What are the negatives about this diet, especially for children and women?

The complete exclusion of:

So why is this a negative. Why are are cereals and grains so important?

Yes you can get energy and fibre from different food groups, but cereals, especially wholegrain cereals are a fabulous source of both.

Cereals and grains are high in dietary fibre and complex carbohydrates AND at a relatively affordable price point which is important from a public health and food security initiative for the general population.

Of course that lower price point is fairly driven by food manufacturers and the ‘big bad’ food corporations. But as a consumer, you do have a choice to choose who you purchase from.

In regards to wheat, my professional opinion is that you should eat a wide range of cereal or grain products and not solely focus on wheat as your only outlet, or focus on any one particular grain. There are fabulous grains available now-a-days in the general supermarket but even incorporating more brown rice would be beneficial to your diets and your children’s diet.

And 4-6 serves is actually not that much. Have you check what a serving size is recently? Not as big as what you are eating (or me for that matter) now I am sure. Look at what 1/2 cup of cooked pasta is.

And the absence of dairy, why does that concern me?

Again similarly to cereals and grains, dairy has the highest bio-availability of calcium for the general population at a price point also accessible by many.

Yes you can get calcium from other foods, namely leafy greens, seeds, nuts, fish, to name a few. But the actual amount that we get from them is less in comparison.

Let’s crunch some numbers to prove that point.

To get the SAME quantity of calcium you will need to consume:

1. 224grams of raw english spinach which is around a cup.

Sure you say, my kids could drink a green smoothie and have a cup of green spinach in there. But what about 500mg of calcium which is around 4 cups of spinach. That is how much a 3 year old requires for calcium. Or an 8 year old, who needs 700mg. That’s a lot of spinach.

That is whole almonds and is higher then milk you say. But what else comes with almonds….a lot of fat. Especially in 100grams of them. 54grams of fat which is made up of predominantly mono-unsaturated fats which is great but that would be the fat intake for the day of a small child, and that is all they have eaten and they haven’t even obtained their calcium intake of +500mg.

For a child who is 3 years old, they need around 500mg of calcium a day which is easily obtained with calcium rich foods like milk, yoghurt and cheese. An 8 year old requires 700mg of calcium.

I appreciate that dairy and lactose is an issue for many people but dairy has an incredibly bioavailable source of calcium which is important for children and especially women. One critical public health concern at the moment which is very real, is the very low intake of calcium in young girls and teenagers. Combined with poor supplementation with other foods there is a real risk of developing osteoporosis.

Calcium is crucial to  children’s development, especially with bones and strength.  To neglect them of calcium for fashionable reasons is irresponsible. Of course,  if you are intolerant to lactose or milk protein, then you will by necessity have to find alternate calcium sources and be diligent about your consumption.

Fortification is also another option, but fortifying your foods is not very hunter-gatherer –esque. Does it not defeat the process? Aren’t we trying to get back to 10,000 years ago?

If you are worried about the over reliance on cow based protein such as casein, mix it up. Goats milk is a great option and the closest bio-chemistry to human milk.

And if you can get your child to eat 4 cups of leafy greens to obtain their calcium intake then we need to talk, because THAT IS AMAZE-BALLS!

In summary, sure there are some great highlights of the paleo diet. Unprocessed real foods with minimal intake of processed sugars. But maybe we should just focus on getting our children to eat their 5 serves of vegetables and not eat processed snacks and takeaway food. That in itself would eliminate a lot of junk. Why don’t we try an eat wholegrain foods and other delicious grains? Eat a rainbow of fruits and vegetables? Consume a wide variety of foods?We don’t have to really exclude anything. I am sure there would fabulous health outcomes associated with that as well.

This post was contributed by Little People Nutrition.  Visit www.littlepeoplenutrition.com.au for more nutrition information for your family.

I am Mandy and I am a Mama to 2 and half poppets, Nutritionist, Food Scientist and Kitchen Mess Maker who is simply passionate about community health, nutrition and food.
View all posts by Little People Nutrition →